Could do very rudimentary plates this way, in theory 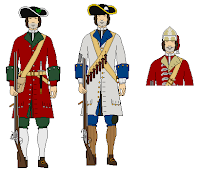 A Williamite, a Jacobite, a grenadier
Posted by Dan Harper at 12:56 1 comment:

NB: The OOB is taken from the Battle of the Boyne Osprey by Michael McNally
1. = Walton
2. = Lawson
Regimental lineage from Walton
I intend to cover every relevant source this way, eventually

The Regiments of Horse:
1. Trumpeters shoes with spurs, otherwise jackboots
2. Cuirasses and back plates worn until 1697-8. Horse grenadiers “equipped and performed as dragoons.”

Regiments of Foot:
1. The coats of Drummers of regiments other than Royal regiments, were of the colour of the regimental facing and with red facings. Hautbois, who were later subject to a similar rule, had their coats at this time of the same colour as those of the men. 2. Officers’ sashes usually crimson trimmed gold and silver, officers’ cuffs almost always coat colour. Lieutenants “black corselets studded with gold,” ensigns silver. Cartouche boxes “issued to most regiments” in 1693, with the bandolier of cartridges “remaining in use to some extent” until 1700. Proportion of matchlocks to firelocks “about fifty percent per company during the last campaigns of William III,” without sling, grenadiers always equipped with firelocks, with sling. Waist belt with frogs for sword and plug bayonet “generally formed part of the equipment for musketeer companies” by 1686.

Regiments of Horse:
1. “those I see [in Belfast, March 1690, regiments unspecified] of the Horse are white lined white and buff waistcoats”

2. John Kinross says of Col. Harbord's Troop, 'Harbord was the financial controller and his men were clerks'

Zurlauben checks out, obviously, Biron are Famechon far as I can tell, but the others are something of a mystery
Posted by Dan Harper at 10:35 2 comments:

Very strange shape, very tall, and a cypher on the front?

Regiment is the Queen's, in their capacity as the Tangiers, far as I can make out

Couple other pictures while I'm at it, all from our friend the Vinkhuijzen Collection
Posted by Dan Harper at 12:01 1 comment: 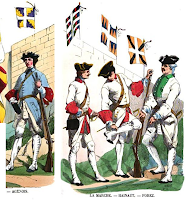 Couple of interesting plates (cropped and stuck together here), chiefly interesting for the flags; uniforms are of a fair bit later
Posted by Dan Harper at 13:03 No comments:

Identity of the Famechon and Mérode Regiments, and other things

Came across http://books.google.com/books?id=noAaAAAAYAAJ&dq=Jean+bernard+O%C3%8BHM&source=gbs_navlinks_s which appaears to be a good resource for the French, soI had a search for the two French regiments I can't find a lot on, and came up with:

Became the Régiment du Saint-Mauris in 1761(via other name-changes), which gives us a flag of brown/black/black/brown according to www.drapeaux.org, and grey coats faced red with brass buttons and a black/black/black/black flag according to http://patricemenguy.free.fr/sujetsdubienaime/uniformes/Infanterie/Francais/Biron.htm

A bit trickier. The PDF above says it became the régiment de Tournon in October 1690, and was disbanded in 1698. However, it still seems to have been around for the Camisard uprising according to http://www.camisard.org/forum/read.php?id=69870, which has the first poster referring to 'Agenois (Tournon)'. Going to drapeaux.org, we have this as the colour:

But this Rigo plate (taken from an eBay auction, of all places) disagrees:

as does the flyingpigment.com plate, which seems to replace Rigo's blue with red:

So I dunno. Drapeaux.org tends to disagree with other sources to varying extents, but I have no idea what is more correct. Regarding the top picture, I'm trying to have a few more pictures in my posts so here's a random image from the Vinkhuijzen Collection

Also, while looking this up I came across this:

which would indicate that the Dillon regiment originally wore blue and that their colour was red and blue, which confuses things further (if I am reading it correctly)
Posted by Dan Harper at 13:39 1 comment:

Came across a couple relevant-ish items in London:

1. 'The Market Place and the Grote Kerk at Haarlem' by Gerrit Berckheyde (dated 1679) in the National Gallery contains this rather martial-looking figure in the bottom-left who is presumably an officer. Very short sleeves notable

EDIT: A Mr. Rampjarr, from the 'Anno Domini 1672' blog at http://rampjaar.blogspot.com/ kindly informs me that the date of the painting is in fact 1674.

This doesn't tally to any known regiments, incidentally, but was nice to see
Posted by Dan Harper at 09:57 1 comment: